Who could forget when Patriots quarterback Tom Brady played half a whole game with under inflated footballs? It was discovered during the game that the Patriots’ footballs were slightly deflated, even though official NFL game footballs are checked to verify they measure between 12.5 and 13.5 psi prior to kickoff by game referees. The engineers at Midé—a small engineering company outside of Boston—took great interest in Deflategate not only because many of them are diehard Patriots fans, but also because it presents a real engineering problem. Midé has been known to handle some pretty tough engineering challenges.

“We focus on finding customer problems,” said Chris Ludlow, Midé’s VP of Engineering. “Then we solve them.” 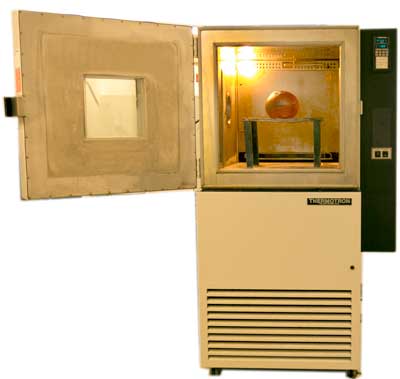 Bulkhead Seals that were developed for the US Navy to seal ship compartments to prevent progressive flooding (think of the Titanic).

Thermally Responsive Insulation that are fibers that change shape depending on the temperature (think sleeping bags, for example).

About a week after the Deflategate game, Midé engineers started doing some math with the ideal gas law to see if a change in temperature could affect air pressure. Then, they decided to set up an experiment with their Thermotron SM-8 environmental test chamber.

“Even though we are Patriots fans, we wanted to prove the science behind temperature and air pressure,” said Ludlow. “Our reputations as engineers are more important than our loyalty to the Patriots.”

For the experiment, two official NFL footballs were placed in the calibrated Thermotron thermal chamber and set at 24°C (75°F)—the approximate temperature when NFL officials tested the footballs about an hour before the game. The first football’s pressure measured 13.4 psi (the high end of the allowed range) and the second was 12.6 psi (the low end of the allowed range, where Tom Brady prefers it).

The footballs were then placed back in the chamber and set at the game time temperature of 10°C (50°F). After 90 minutes each football’s pressure was measured again. The first ball dropped from 13.4 psi to 12.3 psi, and the second ball went from 12.6 psi to 11.5 psi, a significant difference!

To make an impact on their testing process, Midé first purchased a Thermotron chamber based on their performance and reputation. So, when they needed a new chamber they looked to Thermotron because their first one was reliable and the new chamber would do the same.

“We perform reliability tests to get new technologies into the marketplace,” said Ludlow. “We want to test and identify failure modes and then design those failure modes out of the product before the product is launched.&rdquo

Like the skeptics of Midé’s experiment, Ludlow said that some markets and industries are cautious of new products and technologies. Midé engineers put products through the ringer prior to market introduction to make sure they will work and are reliable. “We don’t have 15 to 20 years to test a new product to make sure it works that long,” said Ludlow. “By performing aggressive environmental testing we can prove that a new product will withstand those rigors.”

Ludlow recorded the experiment and posted it to the company’s YouTube page. With nearly 2,000 views on YouTube, the video generated a lot of interest, which has given Midé the opportunity to reconnect with customers and even a former employee who is a Colts fan.

Midé uses engineering and thermal testing to solve some of the industry’s biggest problems and questions, not just sports controversies. No word on whether or not Midé shared their findings with Roger Goodell and the NFL

To see the experiment visit mide.com/deflategate.

Any cookies that may not be particularly necessary for the website to function and is used specifically to collect user personal data via analytics, ads, other embedded contents are termed as non-necessary cookies. It is mandatory to procure user consent prior to running these cookies on your website.