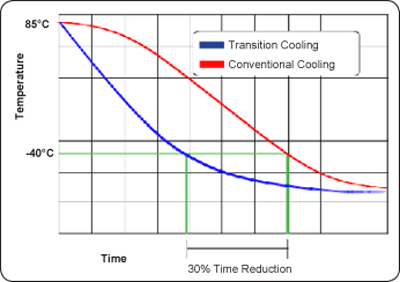 This innovative feature increases ramp rates up to 30% while reducing power consumption, as shown in the graph above.

To illustrate the energy savings of Transition Cooling, Thermotron conducted several tests using SE-600 chambers to run thermal cycling tests from 85°C to -40°C in 75 minutes. Using the Transition Cooling feature, the high stage compressor was used to cool the chamber from 85°C to an optimal transition point, typically around 0°C. At the optimal point, both compressors began working to efficiently take the chamber’s temperature down to -40°C. A significant amount of energy was saved by utilizing only the high stage compressor for two-thirds of the cooling time. Below is a table with test data.